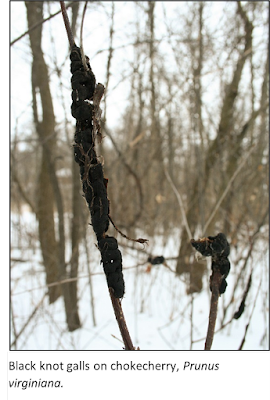 In this patch of winter woods, black knot has a grip on the understory. Dark, lumpy galls crust over many stems and branches, flagging them against the snow. From a distance it looks like scat, but this isn’t animal stuff. It isn’t plant stuff either, not entirely. It’s a fungus, and it’s dropping hints about the plants growing here.

Many fungi that grow on plants, including black knot, have specific hosts. Some grow so consistently on one plant or another that when they’re found, they can help identify a plant to its genus, if not its species. This can be especially helpful in winter, when plant ID is challenging without leaves.

Many fungi serve as reliable guides to plant identification, but here are three that are especially common or commonly sought and easy to recognize. 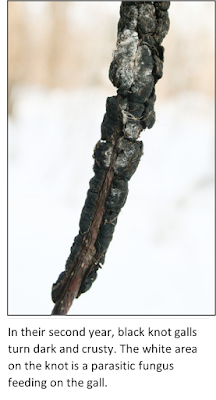 Black knot, Apiosporina morbosa, infects trees and shrubs in the genus Prunus, a group that includes native and introduced cherries and plums. In Minnesota, the disease is especially common on chokecherry, Prunus virginiana, a small tree found in open woods and woodland edges throughout the state. It also affects American plum (P. americana), Canada plum (P. nigra), pin cherry (P. pensylvanica), black cherry (P. serotina) and sand cherry (P. pumila). All these are native shrubs and trees, but several introduced species and cultivars of Prunus are also susceptible to the disease. 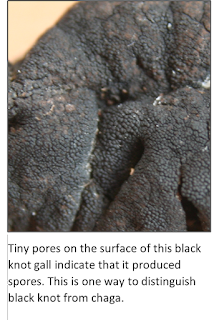 Black knot is spread in spring, when fungal spores produced in these knots are carried by wind or rain to new hosts. A year later, after the fungus has stimulated its host to grow a mass of large cells, the infection appears as a swelling with a light brown or olive-green surface. In the second summer after infection, the gall turns black. Some galls may have white or pink patches on the surface from other fungi parasitizing the knot.

Tiny pores on the surface of a gall mark the exit holes for spores. They’re easiest to see with magnification. Pores are one way to distinguish black knot from chaga, a similar dark, crusty fungus that grows primarily on birch trees. Unlike black knot, chaga is sterile -- it doesn't produce spores. More on that next.

Chaga, Inonotus obliquus, is a parasitic fungus found in northern forests around the world, including the United States and Canada. It has been used in folk medicine for centuries and is still harvested and consumed for its purported health benefits. Formal studies of its medicinal use continue. 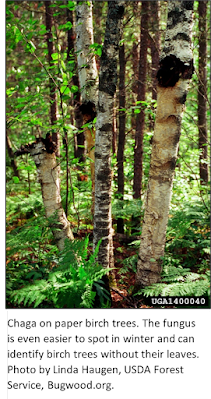 On living birch trees, chaga looks like a hard, irregular, black mass erupting from the trunk. Likened to burned charcoal, the surface is a melanin-rich mass of dead fungus over an orange or brown interior. The masses, popularly called conks, appear on trunks or large branches, but not on small branches. An infected tree may bear 1-3 conks.

Chaga conks are the visible part of the fungus. The hidden part lives mostly in the heartwood, where it causes white rot. The tree may live with the infection for up to 80 years, producing slow-growing, sterile conks that take many years to mature. 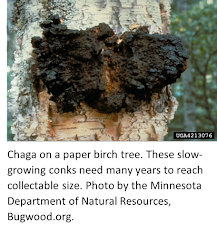 Inonotus, the fungus that produces chaga, reproduces only after its host dies. The fruiting body (actually a spore-producing body called a basidiocarp) is a mat of slender, vertical tubes formed under the bark, typically above a sterile conk. As the fruiting body develops, it exerts so much outward pressure that it will suddenly rupture the bark. It’s a fascinating find, but a rare one. Fruiting bodies are produced only once in the life cycle of the fungus, and they live for just a few days.

Chaga look-alikes include black knot and several shelf mushrooms in the genus Phellinus. Unlike chaga, these fungi release spores through tiny pores. Black knot pores cover the gall, wheareas shelf mushrooms have a pore layer on their lower surfaces.

A note about harvesting chaga:

Because of its purported medicinal value, chaga is in high demand, so harvest from some public lands is regulated. According to Ed Quinn, Natural Resource Program Supervisor for the Division of Parks and Trails at the Minnesota DNR, harvesting chaga is illegal in state parks, state recreation areas, state monuments and state waysides. Although state park rules permit collection of­­­­ mushrooms for personal use, chaga is technically not a mushroom because it isn’t a fruiting body -- it doesn’t produce spores. In addition, use of spikes, ladders, knives and hatchets to reach and collect the fungus can damage trees and create wounds that may leave them vulnerable to pathogens and insect pests. Finally, because the fungus slowly rots the heartwood of infected trees, climbing them can be unsafe.

The rules in state forests differ from those in state parks. According to Dave Schuller, State Land Programs Supervisor for the Division of Forestry at the Minnesota DNR, collecting chaga for personal use is allowed without a permit, but host trees must not be damaged. Commercial harvest is allowed with a special products permit from a local DNR forestry office. The permit requires harvesters to take only the visible part of the fungus, without cutting into the stem or damaging live trees. More information about chaga harvest is available from the University of Minnesota Extension Service publication linked in the references below. Again, safety is paramount when harvesting chaga. Because trees bearing the fungus may have significant interior decay, climbing them is risky and can result in serious injury.

Harvesting chaga on other public lands, such as regional or local parklands, may also be regulated. Check with the appropriate authority before heading out.

There are also concerns about the potential effects of collection on chaga biology and ecosystem health (Thomas et al., 2020). One issue is that overharvesting chaga has unknown effects on the ability of the fungus to reproduce. Taking too much, too often could delay or deny Inonotus its once-in-a-lifetime opportunity to make fruiting bodies, with consequent effects on its spread.

Overharvesting also has unknown effects on the function of ecosystems where chaga is found. Other living things – insects, for example – may depend on chaga in ways not yet understood. Without that understanding, aggressive collection of chaga could have ripple effects on ecosystem health. More study is recommended.

Smooth patch looks like it sounds: It’s a smooth patch on otherwise rough bark. Usually the area is low on the trunk and sunken and lighter than surrounding bark. Smooth patch disease is caused by any of several fungi, especially Aleurodiscus oakesii. This fungus prefers trees in the white oak group, In this region the most common hosts are white oak, Quercus alba, and bur oak, Quercus macrocarpa. Less often, smooth patch is also found on birch, ash, willow and basswood.

The fungi that cause smooth patch feed only on dead outer bark and don’t directly harm the tree. Small, cup-like fruiting bodies are often seen within the smooth patch. They are light brown or gray with curled edges. In winter they may be shriveled and look like lichens. The genus Aleurodiscus translates to “flour disc,” named for the whitish, dusty appearance of the disks in spring and summer.