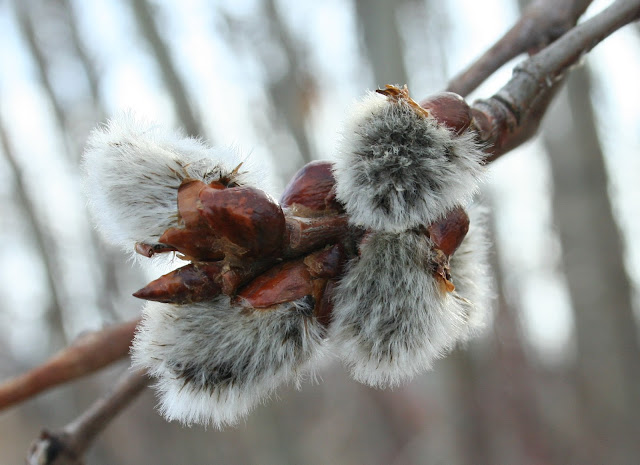 If you’re eager to see something in bloom, look for quaking aspen (Populus tremuloides). In southern Minnesota, the tree’s flower buds broke in early March and the flowers are almost mature. Don’t expect to see anything showy, however. Early bloomers like quaking aspen tend to be wind pollinated. There aren’t many insects around yet, so they don’t produce large flowers with colorful petals. Instead, quaking aspen produces dozens of tiny flowers on small spikes called catkins.

The only flower parts you might see, if you look closely, are stamens or pistils. Individual trees usually bear only one kind of flower. In other words, trees are either male (pollen-producing) or female (seed-producing). Both male and female trees flower before leaves emerge, timing the wind-driven spread of pollen when there is the least interference.

You might also notice that all or most of the trees in a stand of quaking aspen bloom at the same time. That’s likely because they’re clones. Quaking aspen reproduces vigorously by root suckers, with young plants emerging amid or around a stand of older trees. All individuals in a clone are connected by a common root system and are genetically identical. In a sense, they are one being. 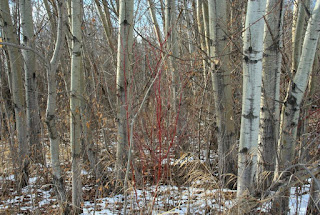 The stand pictured here, found in western Hennepin County, covers about 2,000 square feet. Most of the trees in the stand bloom at the same time, so they probably belong to the same clone. In other words, that’s one organism covering 2,000 square feet. That’s big, but it’s far from the biggest clone of quaking aspen. A stand in Fishlake National Forest in central Utah, called Pando (Latin for “I spread”), comprises more than 40,000 individuals, all male, together covering 106 acres and weighing an estimated 13 million pounds. Pando was once the largest known organism on Earth, and one of the oldest. Although its exact age is uncertain, the stand is thought to have originated at the end of the last glacial period, about 11,000 years ago.

Unfortunately, Pando may be declining. Scientists have noticed that the stand is producing fewer young trees. Grazing and browsing of root suckers is one possible reason, but diseases, insects and lack of disturbance, which favors vegetative reproduction, may also be causes. Efforts are underway to understand why the stand isn’t regenerating and to slow or prevent its further decline.

Far from Utah, in this small stand of quaking aspen, female trees will soon be pollinated and release their cottony seeds. Like the pollen, the seeds are carried by wind, and in a month or so there will be a blizzard of them. If they happen to land where soil is moist – even for just a few hours – they will germinate and an infant stand may be born. It’s a chancy way of reproducing, but even Pando started this way. Big clones from little aspen seeds grow.