How to Identify Common Buckthorn in Winter

For an explanation of the terms used here, see a previous post, “How to Identify Deciduous Trees and Shrubs in Winter.”  A two-page guide to Buckthorn ID is free to download.

Common Buckthorn, Rhamnus cathartica, is an invasive shrub or small tree that was introduced to the U.S. in the late 1700s as an ornamental and a hedge plant. Thanks to its prolific fruit production, it soon spread to a range of habitats, from forests and savannas to prairies and wetland edges. According to Bell Museum herbarium records, it has been present in Minnesota since at least 1937, when it was found at a barge terminal on the Mississippi River in Minneapolis.

This aggressive species degrades habitat in many ways. Typical of many invasive plants, established stands of Buckthorn shade out native species and reduce diversity. Their nitrogen-rich leaves are quickly consumed by soil invertebrates, including invasive earthworms that deplete the duff layer of organic matter. The resulting bare, mineral soils erode more easily and are more quickly colonized by additional Buckthorn or other invasive plants, such as Garlic Mustard (Alliaria petiolata).

Because Buckthorn retains its leaves late into fall, it is easy to recognize by the green layer it forms under a leafless canopy. Even after it sheds its leaves, however, there are easy ways to recognize this species. In fact, winter can be an ideal time to map and manage Buckthorn. This post shows how to identify the plant by its twigs, buds, bark and fruits.

“Buckthorn” Describes the Ends of the Twigs

Buckthorn's common name comes from the pair of curved buds at the ends of the twigs. They resemble a buck's hoof, and because a thorn is often found between them, the plant is called "buck-thorn." All buds are covered by multiple, dark brown scales. Lateral buds are mostly subopposite.

Bark is Warty to Flaky with an Orange Inner Layer

Buckthorn saplings have silver or brown bark with light, horizontal, warty lenticels. As the trunk grows, its bark turns dark brown and flaky. Inner bark is bright orange. The bark of cherries and plums can look like Buckthorn, but none have bright orange inner bark or brown, subopposite buds.

Females Have Blue-Black Fruits – Lots of Them 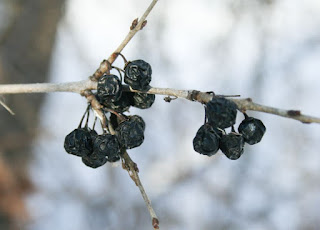 Common buckthorn has separate male (pollen-producing) and female (fruit-producing) plants. Females produce hundreds to thousands of globose, dark blue to black, berry-like fruits that are clustered at the nodes. The fruits may stay on the plant through winter. Ingesting them causes nausea and vomiting, so this plant is also called purging buckthorn.

Glossy Buckthorn (Frangula alnus), another invasive, prefers wetter habitats than common buckthorn. Its twigs are not tipped with thorns. Buds are alternate and in winter are covered by rust-colored hairs rather than scales. Bark of younger trunks is speckled. Inner bark is yellow.

Alder-leaved  Buckthorn (Rhamnus alnifolia), a native shrub typically found in moist or wet soils in forested parts of Minnesota, rarely reaches more than 3 feet tall, and its stems are typically no more than 1 inch in diameter (Smith 2008). Its buds are clearly alternate and lack thorns.

Buckthorn: What You Should Know, What You Can Do. Minnesota DNR. Guide EWR_395_17. (This is formatted as a printable guide. )