This herbaceous perennial is among the first to bloom on the deciduous forest floor. It's also among the hardiest.

Every year, bloodroot throws the dice. It blooms surprisingly early, risking the return of winter weather to grow and flower when light intensity is highest on the deciduous forest floor. Its way of surviving in shade is to mostly avoid it, and thanks to several adaptations to cope with the uncertain conditions of early spring, it has succeeded.

Sometime in late March or early April, single basal leaves spear through the leaf litter, wrapped around and protecting flower stalks bearing one, delicate bud. On dry, sunny days, the flowers open like bowls, each a brilliant display of eight or more petals around a mass of orange-yellow stamens and a central pistil.

Little else is blooming at the time, so bloodroot doesn’t have much competition for the few pollinators that are active in early spring. Although bloodroot has no nectar, insects nevertheless circle over the flowers in search of a sugary sip.  A few will land inside, and over the course of a few days, they will find that Bloodroot’s offerings change.

When a flower first opens, only the stigma is mature. The anthers need another day or two before they’re ready to release any significant amount of pollen. Although visiting insects won’t find much pollen to gather from a young flower, they can deliver what they collected from an older one. In rapid succession, the stigma receives the pollen, the eggs are fertilized, and seeds begin to develop. Such cross-pollination has the advantage of mixing genes from different plants, creating new combinations that might improve offspring survival.

Self-pollination isn’t likely to occur at this stage, in part because the anthers aren’t mature but also because the stamens initially bend away from the pistil. By day three in a flower’s life, however, the anthers are fully developed and the stamens change their position. Instead of bending away from the pistil, they bend toward it, increasing the odds that the flower will fertilize itself.

In a sense, this is bloodroot’s life insurance policy. If cross-pollination doesn’t happen – say in a stretch of cold, rainy or snowy weather that limits pollinator activity – self-pollination is a fallback. The resulting seeds will produce offspring much like the parent, but at least there will be seeds, tiny propagules that can be disseminated to expand the population.

Of course, insects aren’t the only animals looking for food in early spring. Hungry herbivores are also on the prowl, and bloodroot provides some tempting, tender shoots. One chomp and bloodroot could lose its annual opportunity to grow and reproduce. The “blood” of bloodroot tends to discourage that activity, however. It contains several alkaloids, molecules that are distasteful if not harmful to animals that eat them. Alkaloids are most concentrated in the roots, but they are found in all parts of the plant, including the leaves and petioles. A mouthful of the bitter greens could be enough to put an herbivore off bloodroot for a long time.

It’s a gamble to grow early, but bloodroot has adapted to the risk. The plant's fragile appearance belies a durability born of countless generations on the forest floor. Through genetic trial and error, the dice came to be loaded in its favor. 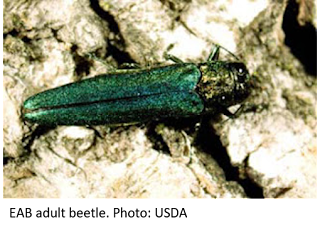 University of Minnesota researchers recently discovered insect-attacking fungi in the larval galleries of emerald ash borer. Their finding offers hope that the fungi could help manage this destructive pest.

Emerald ash borer (EAB) is an introduced beetle that kills all species of ash trees. It has been present in the U.S. since at least 2002 and in Minnesota since at least 2009. Even with a federal quarantine (now removed), the insect spread rapidly. According to the USDA, its range now covers most of the eastern U.S. and the Midwest, with isolated infestations as far west as Colorado. 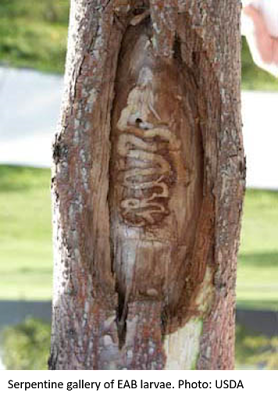 The larvae of EAB cause the bulk of the damage. After eggs hatch, the larvae bore into the inner bark, the area that includes the water- and sap-conducting cells of the xylem and phloem. Their galleries of serpentine tunnels interfere with the flow of needed resources and kill trees in 2-4 years. Hundreds of millions of trees have succumbed to the insect.

Hope for managing EAB rests in part on biocontrols, organisms that prey on eggs, larvae or adults and so reduce their numbers. Three parasitoid wasps have been released in Minnesota as potential biocontrols. More information about that program is available here.

New biocontrols could emerge from recent research by the Minnesota Invasive Terrestrial Plants and Pests Center (MITPPC). In their study published in Fungal Biology, U of M researchers sampled affected trees from Rochester to Duluth and isolated the fungi associated with EAB larval galleries. They identified many types of fungi, including some that are entomopathogenic – fungi that attack insects.

One fungus they identified, Beauveria bassiana, has already been studied for EAB control. The other entomopathogenic fungi they found also need research to see if they, too, could be used to manage the insect.

This good news comes as EAB continues to spread in Minnesota. Since the November 2020 post about EAB, the insect has been confirmed in two more counties, Cottonwood and Blue Earth in southwest Minnesota. The state’s Department of Agriculture maintains a quarantine boundary that now includes 27 affected counties.