Wax Plant in its Waning Days 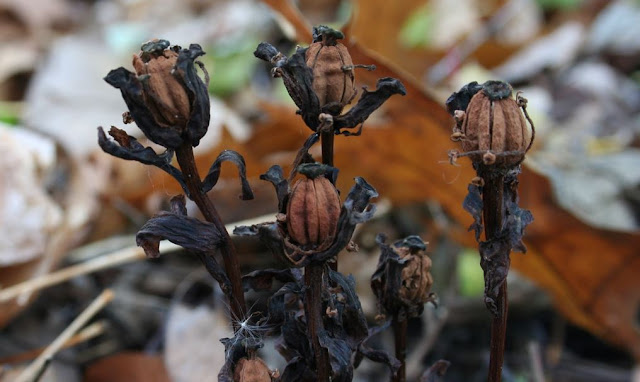 These are the dried stems and capsules of wax plant (Monotropa uniflora L.). The capsules at the tops of the stems split open to release winged seeds no bigger than a millimeter. That’s about as big as the tip of a pencil. 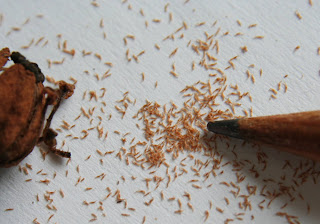 Carried by wind to other places on the forest floor, the seeds will germinate only in the presence of certain fungi that help them grow. These fungi also connect to tree roots, forming associations called mycorrhizae (MY-co-RY-zee). It’s a mutually beneficial relationship. The fungi help gather nutrients for the trees, and the trees provide carbon (sugars) for the fungus.

Wax plant taps that connection. The plant isn’t photosynthetic, so to support its growth it diverts carbon and nutrients from mycorrhizal fungi into its own roots. Because it gives nothing in return, wax plant is a parasite on the fungus. Such plants are called myco-heterotrophs: They get energy and nutrition from fungi.

Being a myco-heterotroph allows wax plant to survive in deep shade. It doesn’t depend on sunlight – it has no chlorophyll to absorb light – so it can grow in dark forest interiors where there is little competition from other plants. The trade-off is its dependency on mycorrhizal fungi for much of what it needs to survive. The thread from tree to fungus to wax plant is both a lifeline and a liability. 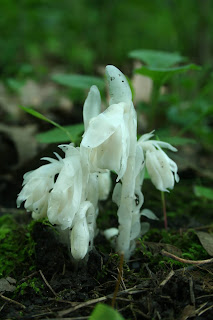 The name wax plant comes from the plants' white, waxy-looking stems. Other common names are ghost plant and corpse plant. It's also called Indian pipe from the resemblance of its curved flowering stems to Native American ceremonial pipes.

Although it's often mistaken for a fungus, wax plant is a flowering plant. In Minnesota, stems emerge in mid to late summer. Flowers are visited by a variety of insects, but they are pollinated primarily by bumblebees. After pollination the hooked stems straighten, darken, and develop seed-bearing capsules.

The name Monotropa means “one turn,” referring to the nodding stems of the plants in bloom. The species name uniflora means “one-flowered.” Typically, each stem bears only one flower.

Wax plant grows in rich, forested habitats in much of North America. This circumboreal species also grows in Asia.

Garlic mustard (Alliaria petiolata), an invasive plant that can also grow in shade, could be harming wax plant and other myco-heterotrophs. Chemicals in garlic mustard are known to interfere with establishment of other mycorrhizal relationships, and they may be doing the same to wax plant.

How Did Bittersweet Nightshade Get Its Name? 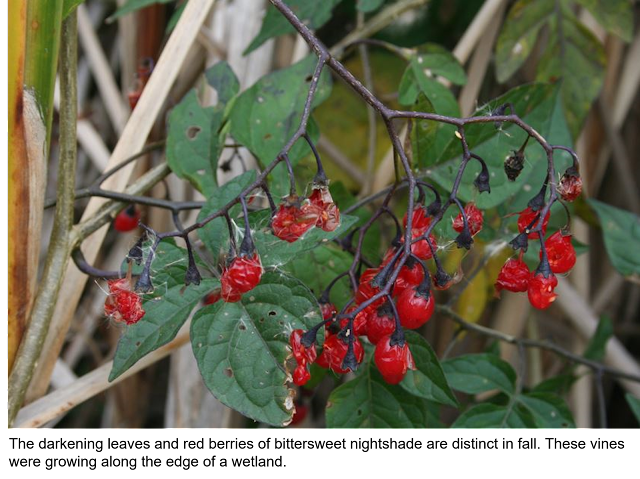