A recent study found that trees in cities leaf out in earlier in spring than those in rural areas.  This post explains what happens as deciduous (leaf-shedding) plants enter and leave dormancy, and how a shift in timing could have ripple effects. 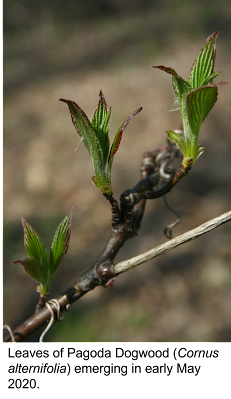 It is December, and the trees are, in their way, asleep. They are dormant, quieted by the declining temperatures and longer nights that signal a time of harsh conditions.

They will have a long nap. Last summer many deciduous trees began covering their buds – next year’s hope of growth – in protective scales. In autumn the leaves gave it up. The chlorophyll, proteins and sugars in their blades broke down or withdrew into branches, trunks and roots to be stored over winter.

As their substance retreats, leaves become liabilities. Through stomates, small pores on the surfaces of their blades, leaves continue to lose water that can’t be replaced from frozen soil. To prevent desiccation, the leaves are cut off.  Invisible lines of cells, called abscission layers, form on the leaves’ petioles, like tear-off lines that mark where they will separate from the trees. Some leaves offered a colorful sendoff and fell. Others, those with abscission layers not quite complete, are still hanging on, rattling in the winter wind.

Although they are dormant now, the trees are primed to renew their growth in spring. After enough cold days have accumulated and as days grow longer, they will begin to stir. As in all aspects of plant growth, timing is everything. If buds break too early, say in an unusually warm February, new growth would likely be damaged by a returning freeze. To avoid this, day length acts as a check. Even if buds have been adequately winter-chilled and temperatures then rise, short days (long nights) are a sign that winter isn’t over, and growth will not resume.

Timing is important not only to avoid freezing, but also to attract pollinators. Insect-pollinated trees and shrubs, especially those that are native here, have long relationships with native insects. Time of flowering may coincide with time of insect emergence and vice versa, each benefiting from the presence of the other. If plants flower earlier than normal, their pollinators may not yet have emerged, or if it's too cold, they may not be active.

If timing of life events -- phenology -- depends on external cues, what happens when temperature and light are altered? Does a tree’s phenology change when environmental indications change, such as in warmer and artificially brighter cities?

Yes, according to a recent study that looked at satellite and phenological data around the globe (1). According to the study, on average, spring green-up occurs six days earlier in cities compared to rural areas, due mostly to warmer urban temperatures.  When photoperiod – daylength– is factored in, the effect is greater. Urban trees exposed not only to warmer temperatures but also to lights on streets, parking lots, billboards and other artificial sources leafed out an average nine days earlier than rural trees. It's thought that night length, normally a check on early leaf-out, is shortened by city light, and the trees are “tricked” into resuming growth in artificially warmer and brighter conditions.

The study raises several questions, especially about climate change.  If a warming climate causes trees to green up earlier even in the countryside, would rural darkness limit how much earlier they resume growth? In other words, without city lights, would winter's long nights continue to serve as a check on how early the trees leaf out?

Also, could warm urban winters, made even warmer by climate change, prevent city trees from accumulating enough cold exposure to leaf out early, even if nights are artificially short and spring-like?

If trees do leaf out and flower early, will allergy season also start earlier? How will insects adapt to the change? Will their phenology shift, too?

These questions can be answered by part by continuing to observe the phenology of plants and animals. Both citizens and scientists are important in that effort. By recording when trees, shrubs and other plants leaf out, flower and form seeds, they contribute to an understanding of what triggers these life events and how their timing might be shifted by environmental changes.

To learn more about phenology and how to help observe seasonal changes, open the Phenology tab.