Thanks to the four biomes that meet here, Minnesota hosts a diversity of plant life. According to the most recent MNTaxa plant checklist, the state is home to at least 2,250 species and varieties of vascular plants (1). Of those, about 94% are flowering plants, and most guidebooks focus mostly or entirely on that group. Some wildflower guides, for example, are organized by flower color, and many others rely on flower parts – their presence or absence, their number, their appearance – to narrow the choices.

It’s useful, then, to know how flowers are put together – to know petals from sepals and pistils from stamens. This post introduces basic flower structure, beginning with the names of flower parts and continuing with common variations.

In a model flower, parts are organized in four whorls. From outermost to innermost, they are sepals, petals, stamens and one or more pistils. In some flowers, pistils are composed of joined parts, called carpels (seed leaves), to form a compound pistil. In others, the pistils are composed of only one carpel, so they’re called simple pistils. The diagram below shows a simple pistil. 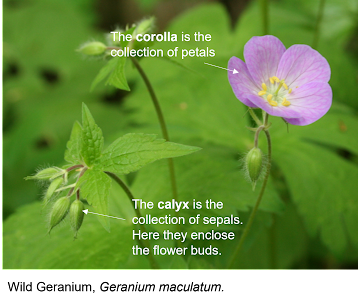 Each of the flowers below has all four parts. Sharp-lobed Hepatica has flowers with multiple stamens, multiple simple pistils, five petals, and five sepals. Large-flowered Trillium has three sepals, three petals, six stamens, and one compound pistil formed of three joined carpels. Three stigmas emerge from the top of the pistil.

The photo of Wild Geranium below shows two flowers in different stages of development. In the left flower, stamens are at peak maturity and are releasing pollen. The pistil in this flower is immature and hidden by the stamens. In the right flower, the stamens are past peak and are withering. The pistil, however, is in its prime, with five, curved stigmas ready to accept pollen. 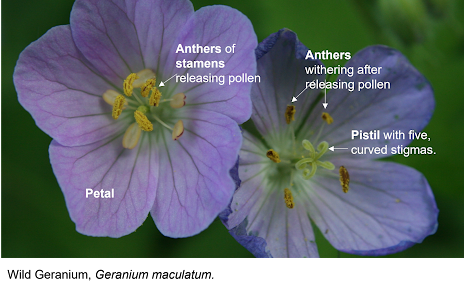 Because the stamens and pistils mature at different times, the flower can’t pollinate itself. This difference in timing, called dichogamy (dy-COG-amee), favors cross-pollination and mixing of genes, creating more diverse -  and perhaps more successful – offspring.

Tepals are petals and sepals that look alike. They are especially common among plants in the lily family and its close relatives. Tulips and day lilies are two garden favorites that have tepals. Native White Trout Lily and Blue-bead Lily also have tepals.

When viewed face on, regular flowers look like wheels or stars: Their parts are evenly distributed all the way around. More than one line can be drawn through the center of the flower to create similar halves. Such flowers are also called radially symmetric or actinomorphic, which means star shaped.

In contrast, irregular flowers have only one plane of symmetry: Only one line can be drawn across their faces to produce similar halves. Irregular flowers are also called bilaterally symmetric or zygomorphic. “Zygo” is a Greek prefix meaning pair. 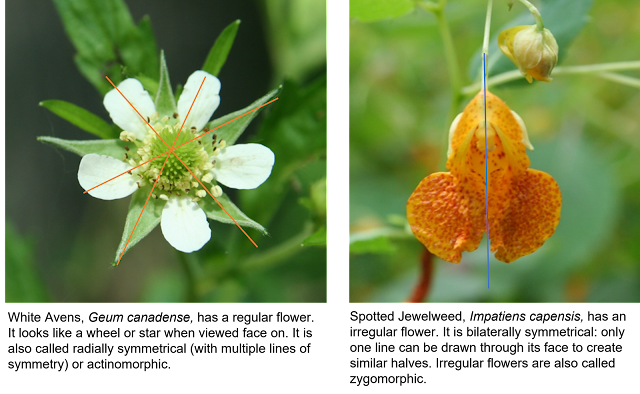 If flowers have all four parts – sepals, petals, stamens and pistils – they’re complete. If they’re missing one or more of these parts, they’re incomplete. Wild Strawberry, for example, has complete flowers. The flowers of Canada Anemone, however, have no petals and are incomplete. In that case, sepals are the large, colorful parts that attract pollinators.

If a species has imperfect flowers and the staminate and pistillate flowers are on the same plant, the species is monoecious (mon-EE-shus), meaning one house. If the species has staminate and pistillate flowers on different plants, it is dioecious (dy-EE-shus), meaning two houses. Sometimes dioecious plants are said to have separate “female” and “male” individuals.

Most flowers of Silver Maple, for example, are imperfect. Staminate and pistillate flowers are shown below. They may be on separate trees or on the same tree, so the plants can be dioecious or monoecious, respectively. Occasionally, a tree may also have perfect flowers.

Wind pollinated flowers don’t rely on insects to visit them, so they lack showy petals and sepals. Those parts are reduced or absent, but stamens and stigmas are often numerous and obvious. Silver Maple, shown above, is wind pollinated, as are willows and aspens. Grasses are also wind pollinated; two  prairie grasses, Big Bluestem and Indian Grass, are shown below. 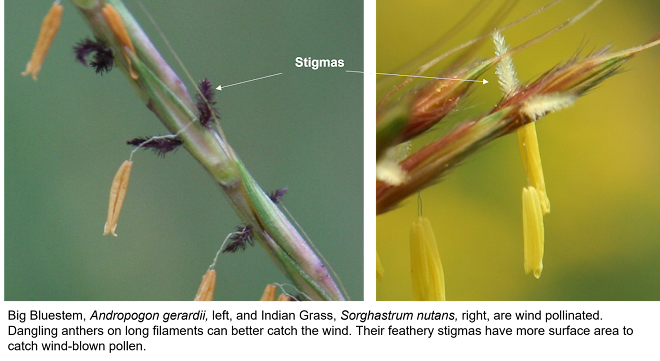 An aster, for example, isn’t one flower but many tiny ones, all clustered on a flat, rounded, or conical receptacle. The flowers in the center are called disk flowers; those around the edge, often bearing petal-like rays, are called ray flowers. A head inflorescence is typical of plants in the aster or sunflower family.

Diagrams and photos of a head inflorescence and other common types are below. In the diagrams, black circles represent flowers. The larger the circle, the earlier the flower matures. 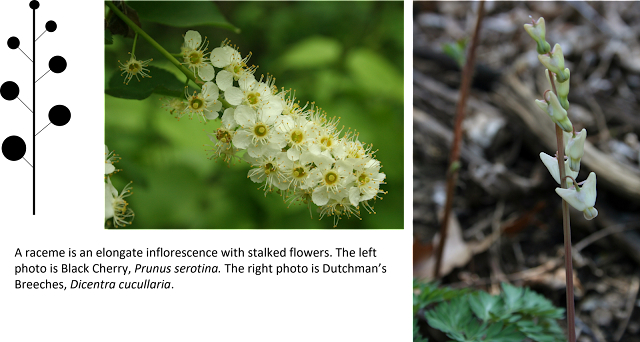 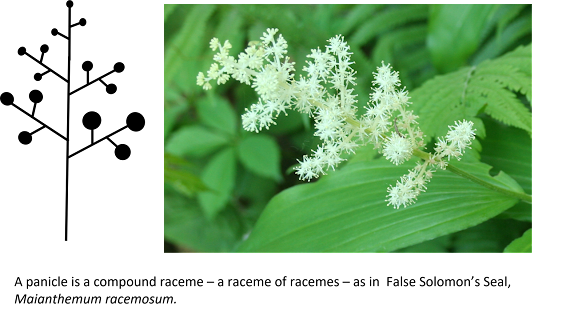 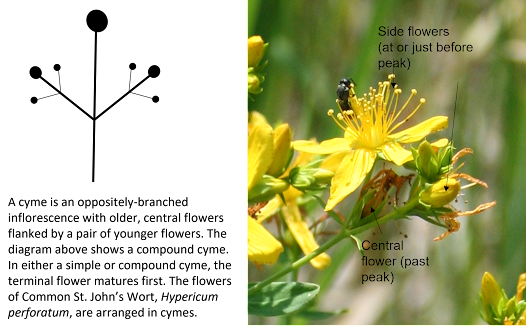 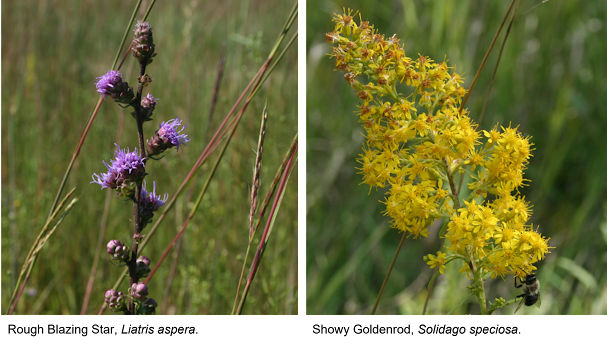 (2) Minnesota Wildflowers: A field guide to the flora of Minnesota. Online at minnesotawildflowers.info.