How to Identify Native and Introduced Phragmites

Phragmites or Common Reed, Phragmites australis, is a 12- to 18-foot tall, perennial grass of wetlands, shorelines and ditches. Two subspecies are common in the U.S. One is the native subspecies americanus; the other is the introduced subspecies australis.

Both subspecies grow in colonies, but subspecies australis is more aggressive and can dominate habitats to the near exclusion of other plants. For that reason, there is growing interest in identifying and mapping subspecies australis to determine the extent of its spread and to target those colonies for removal.

Although the subspecies look alike, there are several characteristics that, taken together, can identify one from the other. The most reliable characteristics are shown below, after a few terms used to describe grass stems, leaves and flowers. 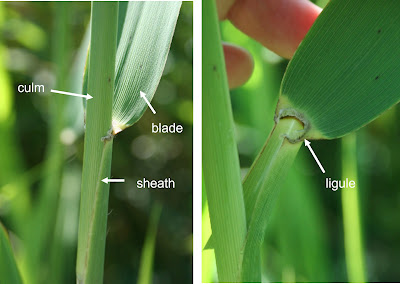 The culm is the stem of a grass. Grasses have round culms that are hollow between the nodes, the swollen areas on a culm. The leaf blade is flat and ribbon-like, whereas the leaf sheath wraps around the culm below the blade. Where the blade meets the sheath, most grasses have a ligule, a membrane or hairy fringe visible when the blade is pulled away from the culm.

Grass flowers, called florets, are specialized for wind pollination. Each floret is composed of two narrow bracts, a lower lemma and an upper palea. Stamens and feathery stigmas emerge from between them.

Florets are arranged in small spikes called spikelets. At the base of each spikelet are two bracts called glumes. Glume length differs between the subspecies of Phragmites. More on that in a following section.

Spikelets of Smooth Brome, Bromus inermis, are shown below. On the left are spikelets with brown anthers and feathery, white stigmas emerging from individual florets. On the right is a single spikelet spread apart to see the florets and glumes. The spikelets are about  3 cm (1.5 in.) long.

To identify Phragmites subspecies, it’s best to look at more than one plant in a colony and at several characteristics of each plant. Hybrids are possible, but they’re said to be rare.

To see ligules, pull back a blade from the middle third of the culm. (Ligules may be immature on the upper third of the culm and degraded on the lower third.) Ligule length differs between the subspecies.
Subspecies americanus: 1-2 mm long, brown, become darker and smudgy in late summer and fall. The photo below was taken in early August.
Subspecies australis: 0.5-1 mm long, appearing as a thin, brown line. The photo below was taken in early July. 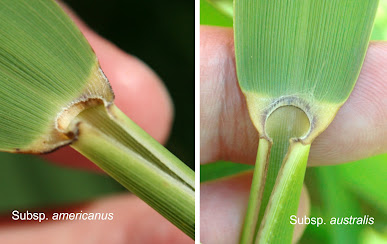 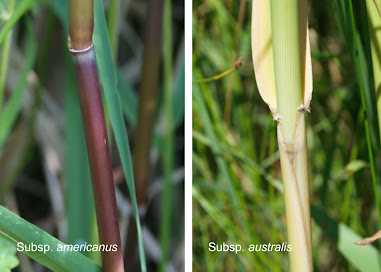 In late summer, fall and early winter, examine the lower stem for the presence of leaf sheaths. The photos below are from mid-November. 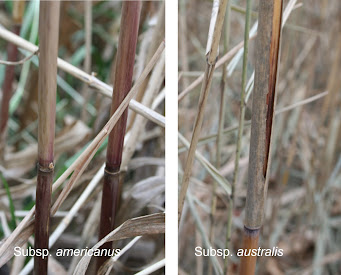 In late summer and fall, measure glume length. By late fall some of the florets may be gone, but the glumes often persist. It's best to look at several pairs of glumes to get an idea of their average length. The photos below are from mid-November. 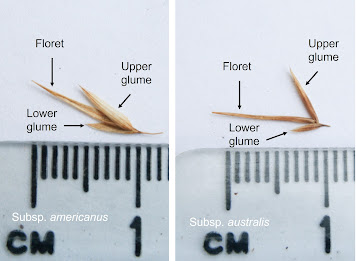 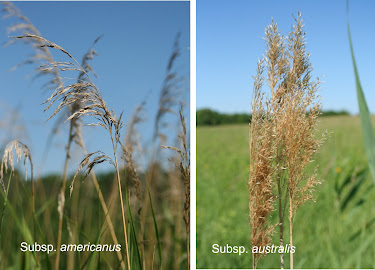 Amur Silver Grass and Reed Canary Grass are two smaller grasses that can be mistaken for Phragmites.
Amur Silver Grass, Miscanthus sacchariflorus, is an introduced grass that has silvery-white panicles in late summer and fall. It grows 6-8 feet tall, shorter than Phragmites, and its leaf blades have a white midrib. Its ligules are a greenish-white, hairy fringe. The photos below were taken in early August.
Reed Canary Grass, Phalaris arundinacea, blooms in spring, not late summer, with smaller panicles that eventually contract. It's shorter than Phragmites, growing up to 5 feet tall. Its ligules are membranous and 3-8 mm long.
References