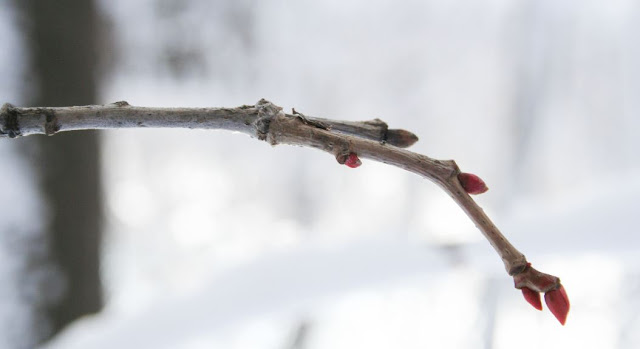 On trees and shrubs, a false terminal bud is a lateral bud at the end of a twig. Unlike a true terminal bud, it doesn’t enclose the growth at the tip of a stem or branch.

This happens in some species when growing shoots don’t harden off in fall. Instead, their stems die back, leaving the end-most lateral buds to take over as the last buds on the twigs.

This difference may seem trivial, but some winter keys use false and true terminal buds to separate species into groups or to confirm a plant’s identity. Fortunately, with a hand lens and some practice, there are reliable ways to recognize each.

Consider a stem of a deciduous (leaf-shedding) tree or shrub with alternate leaves along its length and a growing shoot at its tip. By mid-summer, the plant begins forming buds in leaf axils, the angles between leaves and stems. These are axillary or lateral buds, also called leaf buds. When leaves are shed in fall, their petioles (leaf stalks) leave marks below these buds, called leaf scars.

At the same time, growth stops at the tip of the stem and the young shoot is enclosed in either bud scales or protective leaves. This is a true terminal bud (c). It has no leaf scar (b) below it, and it is often larger than lateral buds (a).

Now consider a stem that, instead of forming a terminal bud, dies back to the closest lateral bud. This is a false terminal bud. It has a leaf scar below it and is about the same size as other lateral buds.

The stub of the withered stem may project above the base of the bud on the side opposite the leaf scar. The mark it leaves, called a branch scar (b), can be mistaken for a leaf scar, but it won’t have vascular bundle scars. This can be hard to see without a hand lens. Also, in some species with false terminal buds, the bud is noticeably angled toward or away from the twig (a).

Black Walnut (Juglans nigra) is a tree with alternate buds (a) and heart-shaped or three-lobed leaf scars. The true terminal bud (b) is larger than the lateral buds and does not have a leaf scar. The last lateral bud (c) sits just below the terminal bud.

American Elm (Ulmus americana), another tree with alternate buds, has false terminal buds. In the photos below, a branch scar is evident above the base of the bud (a) and a leaf scar (b) is on the opposite side, below the bud. Like some other species with false terminal buds, the bud is angled.

Silver Maple (Acer saccharinum) is a tree with opposite or paired lateral buds (a) and a true terminal bud (b) that is larger than the lateral buds and has no leaf scar (c). The last pair of buds (d) sits just below the terminal bud.

Highbush Cranberry (Viburnum trilobum, V. opulus) is a shrub with opposite buds. It does not form terminal buds of any kind. Instead, in fall, the ends of the stems (a) wither back to the last pair of opposite buds (b), which will resume growth in spring. As this pattern repeats, the shrub branches in a Y-shaped form called sympodial growth (c).

The following guides can help with winter ID of trees and shrubs. When using any guide or key, look at several twigs and buds to see what’s typical. Variations are common.

The LEAF Program from UW-Stevens Point is a K-12 forestry education initiative that offers many online resources. Under Curriculum & Resources, choose LEAF Tree Identification Tools. The LEAF Winter Tree ID Key is available there as a downloadable PDF.

On trees and shrubs, a false terminal bud is a lateral bud at the end of a twig. Unlike a true terminal bud, it doesn’t enclose the growth a...