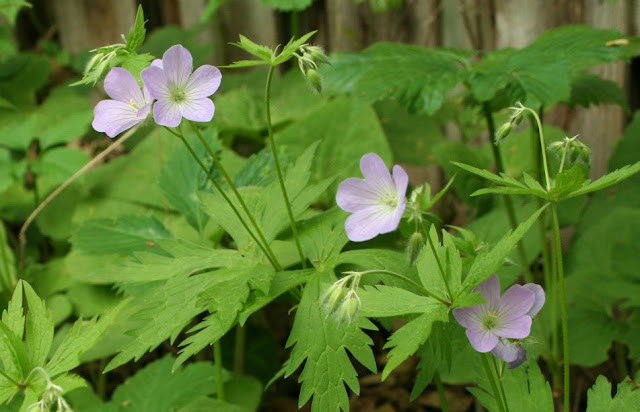 Wild geranium (Geranium maculatum) is a native, herbaceous perennial of open woods and woodland edges. It begins blooming in May, about the same time as Trillium, with loose clusters of pink to lavender flowers at the ends of hairy stems. The plant is also called wild cranesbill or storksbill for the long, beak-like capsules produced after flowering.

The anthers in a flower mature first – an outer ring and then an inner ring – followed by the stigma of the pistil, a sequence that favors cross-pollination (1). A variety of bees, flies and beetles visit the flowers for nectar and pollen, guided, or maybe lured, by the lines on the flowers’ petals. Larvae of several insects also feed on the plant (1).

Collecting seeds from wild geranium can be tricky. As a capsule matures and dries, each of its five parts separates from the central column and curls upward, flinging the seed from the oval chamber at the base. To catch the seeds, it's best to collect the capsules when they just begins to change color. Put them in a closed paper bag to dry and release its seeds.

The seeds need a period of cold, moist conditions before they will germinate, so either sow them outdoors in fall or treat them artificially (2). Instructions are available from Prairie Moon Nursery, prairiemoon.com.

Wild geranium also reproduces vegetatively. Thick rhizomes produce patches of plants that can be divided, ideally in spring or fall. Cut the rhizomes where they make right angles (2). Of course, don’t harvest rhizomes on public land or on private land without permission.

The Pretty Problem of Siberian Squill

Siberian squill is a beautiful, eye-catching plant. Its bright blue flowers are among the first to bloom in spring, providing a pop of early color in gardens, lawns and woodlands. To many who are winter-weary, it's a welcome sight.

Lately, though, the plant is getting attention for a different reason. The same qualities that have long made Ssquill popular – its profusion of flowers, its tendency to spread into masses, its easy propagation – have also raised suspicions that it can be invasive. In some places, squill has jumped the garden border or the naturalized planting to grow where it wasn’t intended. That includes deciduous forests, where there is rising concern that it can displace native woodland plants.

It has taken a long time, and some long-distance travel, to get here. Squill is thought to have arrived in the United States in the late 1700s, when it was imported from its native range in southwest Russia and the Caucuses [1].  Promoted as an ornamental, it reached the Midwest by the mid-1900s. The first record of squill in the Wisconsin State Herbarium [2] is a plant collected in 1955 from Hortonville, in eastern Wisconsin. Later herbarium records find it at Point Beach State Forest near Manitowoc in 1964, the campus of UW-Oshkosh in 1966, and Turville Woods, west of Milwaukee, in 1975.

Squill reached Minnesota sometime later. The garden census for the Eloise Butler Wildflower Garden has counted squill among its numbers since 1985 [3]. The earliest herbarium records from the Minnesota Biodiversity Atlas [4] are dated 1997, when squill was found in Forestville State Park, and 1999, when it was found in Frontenac State Park, both in southeast Minnesota. Today squill is found throughout much of the state.

Judging from records of its distribution, squill can live quite well outside tended plantings. Freed of any apparent constraints, it can reproduce quickly by bulbs and seeds to form potentially large populations. A sample of EDDMapS reports [5] gives some idea of its ability to spread: 7 square feet of cover in a Rochester park; 800 square feet in a park in Maple Grove; an acre – about 43,000 square feet – in the Roberts Bird Sanctuary in Minneapolis, where squill escaped from a garden into an adjacent woodland reserve.

According to these reports, not all wild populations are (yet) large and dense, but there are more clues this can happen. In fact, some people want it to happen. For example, many gardening websites and advertisements picture broad expanses of squill, wide carpets of blue below an overstory of handsome trees. Far from being a red flag, squill’s habit of spreading is viewed as positive. If the pictures don't say it, the words that accompany them do: “Great naturalizer,” proclaims one advertisement. “Best when planted in large drifts,” advises another. One more takes that advice a step further: “Mass in sweeping drifts in woodland, wild or naturalized areas.”

The fear, again, is that sweeping drifts of squill could broom other plants out of existence. Several native spring wildflowers – bloodroot, wild ginger, Trillium, Hepatica, spring beauty, and others – share a similar woodland habitat and phenology, and they may be unable to compete with an aggressive introduction like squill. Proof of harm needs formal research, but until any such studies are complete, informal studies, reports, and observations are raising concerns.

Suspicions are now great enough that leaders in the gardening world are urging caution. The University of Minnesota Extension Service [6] warns that although squill is beautiful, it may be harmful. “Because of its rapid spread and condition tolerance,” they write, “this non-native species has the potential to become an invasive plant.”

At the Minnesota Landscape Arboretum, managing squill has become a struggle. Gardeners there are frustrated by the difficulty of establishing other plants where squill has spread. One gardener tried digging out squill and planting wild ginger. Unfortunately, two years later squill had rebounded and the wild ginger was all but gone [9].

The Southeast Wisconsin Invasive Species Consortium [7] is also wary. Calling squill “a classic case of gardening gone awry,” the group is alert to the probability of trouble. Citing the plant’s cold hardiness and unpalatability to deer and other herbivores, they lament the consequences of its popularity: “Sadly, the same traits that make it attractive as a garden plant . . . are also what make it invasive.”

Understandably, fans of squill find this hard to accept. A lively debate on the Minnesota Wildflowers website includes defenders who like the plant for its beauty, its role as a harbinger of spring, and its sentimental value. Some assert that the plant is well-behaved and is a food source for pollinators. Others want proof that squill displaces native plants.

The debate goes to the heart of invasive species biology. Many plants are introduced because, like squill, they're beautiful. People plant them because they admire them. Most of these species cause no harm to natural areas. Marigolds, petunias and impatiens, for example, usually stay put. A few introduced species, though, have it in them to spread. They might limp along for a while, but eventually they gain enough of a toe hold to dominate a landscape, whether it’s a garden, a yard or a natural area.

Increasingly, squill appears to be one of those runaway species. Some gardeners and natural area stewards have spent years trying to remove squill from garden plots, lawns and woodlands, and their frustration is clear. So are their warnings. They advise removing squill when its populations are small and easier to take out. Better yet, they say, avoid the problem by not planting it at all.

Proof of harm to native plants and pollinators will take time to complete. If studies confirm that squill is invasive, it will be years before that evidence is published. In the meantime, it's clear from a growing number of observations that squill as an emerging concern. As one gardener at the Arboretum put it, “It’s beautiful, but it’s very invasive. When it naturalizes too much, it’s difficult to get rid of.” [8]

Squill is indeed beautiful. This unique plant reminds us of spring and perhaps of those who planted the bulbs with good intentions of creating a pleasing landscape. However, if we’re on the cusp of recognizing that squill can be harmful, now is the time to act. In some places, at least, this pretty plant has become a big problem.

Removing Squill can be a tough job, especially if it’s growing in masses. For tips, scroll through the discussion on Minnesota Wildflowers and see the advice from the University of Minnesota Extension Service [6].

Squill is easiest to recognize when it’s flowering, but it has some look-alikes.

Blue-eyed Grass (Sisyrinchium species) has grass-like leaves and dark to pale purple flowers with yellow centers and yellow anthers. Squill has blue anthers. Three species grow in Minnesota, all in sun. They bloom from May to July.

[8] Pretty, but aggressive squill, by Erin Buchholz. Nature Notes. News from the Minnesota Landscape Arboretum. May 13, 2020.