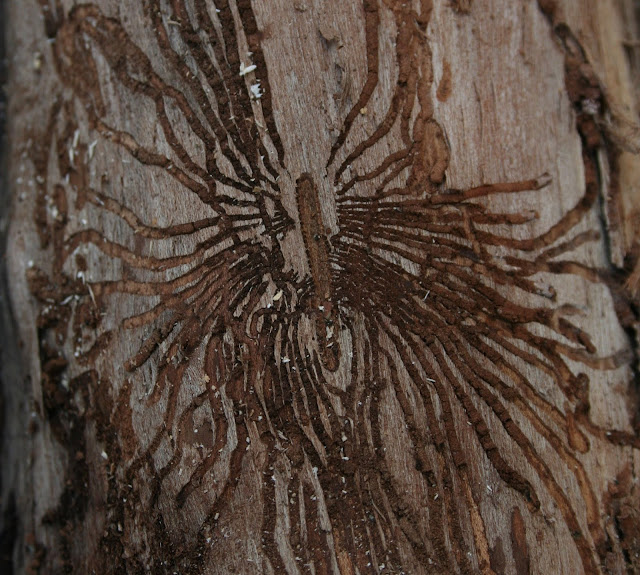 Beautiful but foreboding, the galleries of the European elm bark beetle spell trouble for this American elm. They also cut to the heart of a cautionary tale.

Some months ago, a female beetle found or was lured to this weakened tree to build a nursery. She burrowed through the bark to the outermost layer of wood, where she chewed a tunnel parallel with the grain. She laid eggs along the sides of her gallery, and when they hatched the larvae then tunneled away from her path. After metamorphosis, a phalanx of new adults exited the tree and flew to other elms to feed.

By themselves, the European beetles, Scolytus multistriatus, aren’t a disaster for elms. Neither are native elm bark beetles, Hylurgopinus rufipes, which have similar habits. The much greater harm comes from the fungi they can carry from diseased elms, as this one was, to healthy elms. The fungi, Ophiostoma ulmi and its more aggressive cousin, Ophiostoma novo-ulmi, are better known as the agents of Dutch elm disease.

This is a disease of deprivation. The spores carried into the tree by the beetles germinate inside the xylem, the water-conducting vessels of the wood. As the fungus grows and reproduces, it causes living cells in the wood to push balloon-like extensions called tyloses into the vessels. Potentially, the tyloses could inhibit the spread of the fungus, but they usually form too late. Instead of defending the tree, they combine with gums produced by the tree’s degraded cell walls and the fungal masses themselves to plug the vessels and block the flow of water to the leaves. The leaves then wilt, turn yellow and then brown, and eventually fall. This symptom, called flagging, is one of the first visible signs of trouble.

Just as elms respond too slowly to defend themselves, so communities responded too slowly to stop the spread of this disease. Introduced into the U.S. in the 1920s on imported elm wood, the fungus spread quickly across the country. In Minnesota, the first diseased trees were discovered in the early 1960s in St. Paul and Monticello. Aided by urban monocultures and initial doubt that the European beetles would survive here, Dutch elm disease soon spread to every county in the state. All three native elms - American elms (Ulmus americana), rock elms (U. thomasii) and red elms (U. rubra) – are susceptible, and thousands have succumbed.

The good news is that elms persist. Young elms that survived the first onslaught of the disease have matured, and it’s worth the effort to protect them. In addition, resistant – but not immune – elms have been selected from surviving American elms or hybrid American and Asiatic elms, and they are being planted in greater numbers. They, too, would benefit from sanitation practices that take the fungus out of circulation.

Among its many lessons, Dutch elm disease teaches the importance of tackling invasive species (ones that are introduced and harmful) before they cause widespread damage. Awareness is an important first step to doing that. The page about invasive species includes links to many resources that can help identify and manage such species while their numbers are low. It can be a wily game, but as anyone who’s lost an elm might say, it’s one worth playing well.