What is Tar Spot? 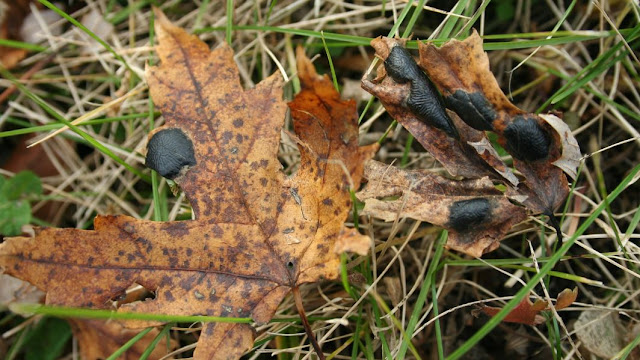 The black scabs on these Silver Maple leaves are signs of tar spot, a common fungal disease that also affects Norway, Red and other maples as well as willows, holly and sycamores.

The spots, called stromata, are the overwintering form of the fungus. When infected leaves fall, they often land with their upper surfaces, and so the stromata, facing up. That puts them in a good position to release wind-borne or rain-splashed spores next spring. The freed spores then infect new leaves, eventually producing light green to yellow spots on the blades that enlarge as the season progresses. The spots turn dark and tarry-looking in late summer and early fall.

Although it looks bad, tar spot is rarely a serious disease. It can cause early leaf drop, but otherwise it's just unsightly. Raking and destroying infected leaves can prevent reinfection in ­­spring. In most cases, fungicides are not recommended.

If you slice through a stroma in spring and examine it with a microscope, you'll find its lower surface covered with tiny, bowl-shaped structures called apothecia. Inside each apothecium are hundreds of  sacs called asci ("as-eye" or "ask-eye," singular ascus). Each ascus contains eight needle-shaped spores that are released through cracks in the overlying stroma.

Because tar spot fungi need living tissue to survive, spores are not released in fall. Instead, they are released in spring, when leaves are emerging from their buds. Blown by wind or launched by splashes of water, many of the spores won't land on a susceptible host. With a good measure of luck, some will, and the life cycle begins again.

All three species belong to a large group of fungi called Ascomycetes, or sac fungi. The apothecia of sac fungi typically are open at the top, but those of Rhytisma are covered by a layer of fungal tissue in the stromata.

Because the protected apothecia resemble wombs, they're also called hysterothecia, from the Greek root words "hystero," meaning uterus or womb, and "theca," meaning case or cup.